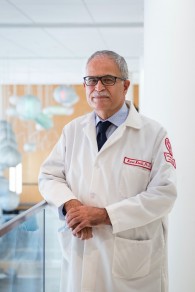 Dr. Kamel Khalili is an internationally recognized neurovirologist and AIDS researcher. He was the recipient a prestigious Fogarty Scholarship from the National Cancer Institute at the NIH. Dr. Khalili began his academic career as an Assistant Professor of Biochemistry and Molecular Biology at Thomas Jefferson University in Philadelphia in 1987. In 1990 he was promoted to the rank of Associate Professor and established the Molecular Neurovirology Section. Dr. Khalili joined the faculty of the former MCP*Hahnemann University in 1996 at the rank of Professor where he establihed the Center for NeuroVirology and NeuroOncology. In 1999, Dr. Khalili established the Center for Neurovirology and Cancer Biology at Temple University. Currently, he is the Laura H. Carnell Professor and Chair (Founding Chair, 2005) of Neuroscience at the Lewis Katz School of Medicine at Temple University is the Laura H. Carnel Professor and Chair of the Department of Microbiology, Immunology and Inflammation and Director of the Center for Neurovirology and Gene Editing. He is also director of the Comprehensive NeuroHIVAIDS Center, a multidisciplinary center that provides research infrastructure to the HIV-1/AIDS research community at Temple and other researchers in Philadelphia. This project is in its eleventh year of funding from the National Institute of Mental Health/National Institutes of Health.

Dr. Khalili has been studying the neuropathogenesis of viruses, most notably HIV-1 and JCV, for more than thirty-five years. In the earlier years of the HIV-1/AIDS pandemic, Dr. Khalili’s work led to several contributions on understanding the neuropathogenesis of AIDS. Since then, he has made several novel and important discoveries about how HIV-1 alters normal brain function and his laboratory studies have identified several pathways that can suppress viral infection. More recently, he has led a team of scientists in his department to develop CRISPR/Cas9 technology, a gene editing strategy, to successfully eradicate HIV-1 in human cell cultures and animal models, which is the first step in a cure for AIDS. In addition, his technology has shown promising results for protecting cells from HIV-1 infection. The studies in cell culture, humanized mice (Dash et al, 2019) and non-human primates (Mancuso et al, 2021) are very promising and this therapeutic modality entered Phase I/II Clinical Trials in 2022. This same technology has been utilized to eradicate herpes simplex virus and JC virus from cell culture models as well. These findings were among the top 100 scientific discoveries of 2014 named by Discovery magazine.

Dr. Khalili has published more than 465 scientific papers in high quality, peer-reviewed journals, he has edited two textbooks related to viral oncology and human polyomaviruses, and has received more than $75 million in funding from the NIH during his career, including CRISPR for Cure, a highly prestigious Martin Delaney Collaboratory grant with total costs of more than $24 million. Dr. Khalili has mentored more than 95 students (including PhD and MD/PhD) and postdoctoral fellows in his laboratory over the past 34 years. He is the founder of the International Society of NeuroVirology and the Editor-in-Chief of the Journal of NeuroVirology. He has been the recipient of numerous awards for his scientific contributions,  including the highly prestigious Pioneer in Neurovirology Award. (2010), a Lifetime Achievement Award in 2013 from Temple University School of Medicine; the Contribution of Research to Humanity from the High Tech for Peace Foundation (Lugano, Switzerland) in 2016, and the Wybran Award for Extraordinary Contributions to the Advancement of the Fields of Neuroimmunology, Drugs of Abuse, and Immunity to Infections from the Society for Neuroimmune Pharmacology (2017), and the President's Award for Outstanding Achievement in Translational Research from Temple University (2017).