Doylestown, Pa., Aug. 11, 2022 – Steven W. Miller, who was widely respected and loved by his colleagues at Johnson & Johnson Consumer Inc., died in 2020 from liver cancer caused by metabolic associated fatty liver disease (MAFLD), a chronic illness for which symptoms don’t emerge until the latter stages.

Steve’s family, friends and former colleagues honored him this week with the dedication of a new laboratory at the Baruch S. Blumberg Institute, where scientists are working on tests to better diagnose MAFLD, liver cancer and related diseases. Along with attaching Steve’s name to the lab, more than $80,000 so far has been contributed to support the associated scientific initiatives.

The idea for raising funds to support research into MAFLD diagnosis came from Dianna Miller, Steve’s wife of 28 years and an employee of the Blumberg Institute. When she learned that a scientist working in that area is on the institute’s faculty, the fundraising effort began, starting with some of Steve’s closest colleagues.

“We were thrilled to contribute to demonstrate how much we all appreciated Steve,” Jenean Janeski, senior manager at Johnson & Johnson Consumer, said. “Steve had such a monumental impact on so many of his colleagues’ lives and careers, and our organization will always be a better place because Steve was part of our J&J family. We’re especially satisfied that the research is being done at the place where Dianna is employed and, going forward, in a lab named after Steve—he always put his people first so we believe it is only fitting to have this lab named in his honor, so even after his death, this lab will allow his legacy of helping others live on in a hugely epic way!”

Jenean worked with Geoff Betrus, strategic sales and business development leader at J&J Consumer, and Jean Holmes, vice president of institutional advancement at the Blumberg Institute, to lead the fundraising effort. At the Aug. 8 dedication ceremony, Jenean and Geoff credited their employer for contributing seed money and significant advice and support to assist the campaign. To date, dozens of Steve’s former colleagues have contributed, and many attended the ceremony, held at the Blumberg Institute just outside of Doylestown.

The scientist who runs the newly christened Steven W. Miller Laboratory is Aejaz Sayeed, PhD, associate professor at the Blumberg Institute. His research aims to develop a non-invasive biomarker test for liver disease surveillance and early detection of liver cancer. Such a test would greatly improve identifying high-risk liver disease patients and potentially lead to much higher survival rates. Dr. Sayeed has determined that the blood of people with liver cirrhosis, cancer and related diseases have heavily mutated messenger RNA (mRNA). It’s a completely new concept in early disease detection and testing and could provide a “liquid biopsy” of the liver to identify high-risk patients and guide treatments.

“Dr. Sayeed’s research shows tremendous potential for producing innovative and revolutionary testing technologies that could enable us to catch liver disease earlier,” said Randall N. Hyer, MD, PhD, MPH, president of the Blumberg Institute and former pharmaceutical industry executive. “I am so moved by the outpouring of love and support for Steve Miller, which further drives us to solve liver cancer. This funding will significantly boost Dr. Sayeed’s research.”

Steve Miller lived in Buckingham Township, near Doylestown, with Dianna and their two children, Mandy and Matthew. A 30-year employee of Johnson & Johnson Consumer Inc., Steve was a manager of data capabilities and analytics. He graduated from The College of New Jersey in 1988 with a business degree.

To learn more about MAFLD, click here. To contribute to the Steven W. Miller Fund, contact Jean Holmes at 215-479-4946 or jean.holmes@bblumberg.org. 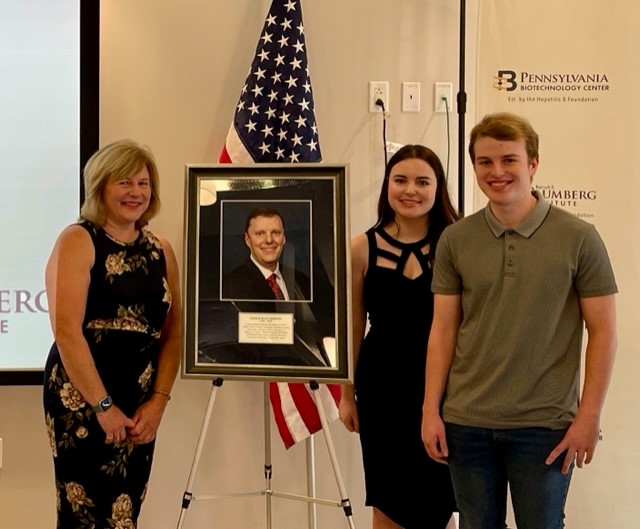 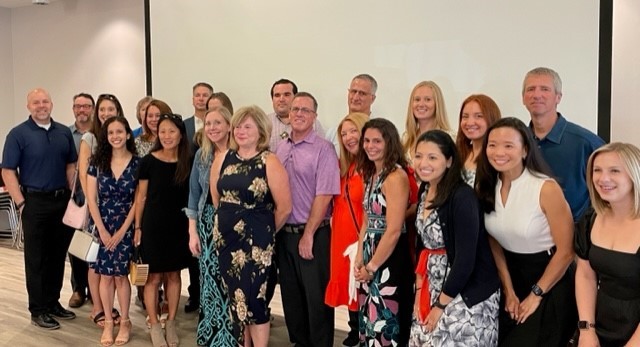 Dianna Miller (center) with some of her husband's colleagues 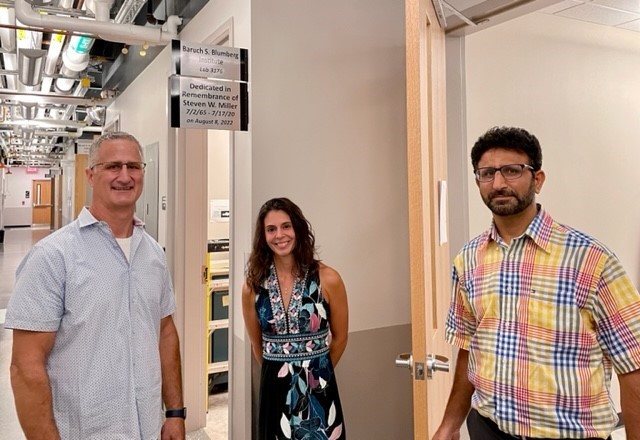