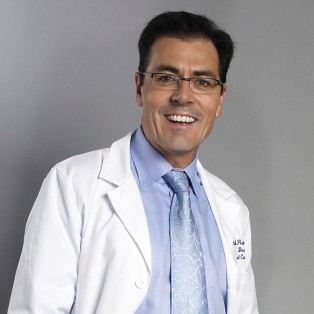 Pestell’s research in cell cycle, prostate cancer, oncology and stem cells is highly cited; he is ranked first in the world by Google scholar citations in cell cycle and prostate cancer, and second in the world for oncology. Pestell is funded by more than $1 million each year in grant support from the National Cancer Institute (NCI) of the National Institutes of Health (NIH), the Breast Cancer Research Foundation, and the Falk Foundation. He is the recipient of numerous national and international awards and recognitions, including election as Fellow, American Association for the Advancement of Science.

Pestell previously was Director of the Sidney Kimmel Cancer Center and Executive Vice President at Thomas Jefferson University in Philadelphia.Under his tenure, the Sidney Kimmel Cancer Center received renewed National Cancer Institute funding and designation twice and the oncology US News ranking rose to #17. Dr. Pestell praised TJU Board President Rick Hevner and TJU President Dr. Steve Klasko for their support. Prior to 2005, Pestell was the Director of the Lombardi Comprehensive Cancer Center and Chairman of the Department of Oncology at Georgetown University.

“The Pennsylvania Cancer and Regenerative Medicine Research Center will function as a hub-and-spoke model for regenerative medical inquiry, spearheading research and collaborating with similar centers around the country and the world,”said Pestell. “Recent breakthroughs in cancer immune therapy have resulted in new biotechnology companies and value for patient’s lives. New discoveries in regenerative medicine are at a similar discovery tipping point. The interface between cancer, stem cells, and regeneration is at an historic moment. Creating a culture in which biotechnology companies are a vehicle to unlock value is key to bringing benefits rapidly to our patients. The Blumberg Institute, under its president, Dr. Tim Block, has a remarkable track record of success in developing companies that rapidly translate urgently needed medical discoveries into clinical practice. The new building planned as part of an expansion of the center will provide further critical mass for these efforts.”

“Dr. Pestell’s recruitment will go a long way toward helping us achieve our goal of finding a cure for diseases associated with hepatitis B and liver cancer,” said Timothy Block, Ph.D., president of the Hepatitis B Foundation, the Baruch S. Blumberg Institute, and the Pennsylvania Biotechnology Center, where both are headquartered. “His research complements the work conducted at the Blumberg Institute, which was established in 2003 by the Hepatitis B Foundation to find a cure for hepatitis B and liver cancer, which is caused primarily by hepatitis B and is the second leading cause of cancer deaths worldwide.”

“This is an important recruitment for the Blumberg Institute and a testament to its growing prominence as a leading entrepreneurial research environment,” said Thomas Shenk, Ph.D., member of the Blumberg Institute Board of Directors, Elkins Professor of Molecular Biology at Princeton University, and member of the U.S. National Academy of Sciences. “Dr.Pestell is a highly accomplished cancer research scientist who will bring a wealth of knowledge and resources to the Institute.”

In addition to leading PCARM at the Blumberg Institute, Pestell will oversee ProstaGene, one of the biotechnology companies he founded. ProstaGene has patented discoveries for cancer metastasis therapies and a highly predictive genetic test for prostate cancer outcome.The company’s prognostic test for prostate cancer showed dramatic improvement over current technologies in three clinical studies. ProstaGene’s patented therapeutic use for cancer metastasis showed dramatic preclinical efficacy. Clinical trials are currently underway. The company is being moved to the Pennsylvania Biotechnology Center, a biotech incubator in Doylestown that is managed and owned by the Blumberg Institute and Hepatitis B Foundation; 35 other start-up life science companies also are housed at the center.

“The Blumberg Institute is the ideal place for scientists to move their discoveries from bench to bedside, with a strong track record of supporting academic entrepreneurship,” said Pestell. “With the Biotech Center’s unique entrepreneurial structure, important research and new businesses based around that work have fertile ground in which to grow.”

“As a scientist and member of the board of directors of the Blumberg Institute, I am delighted that Dr. Richard Pestell will be joining the faculty,” said W. Thomas London, M.D., vice-president of the board for both the Hepatitis B Foundation and the Blumberg Institute, and professor emeritus of Fox Chase Cancer Center. “As a prominent cancer researcher, he will broaden the scope and strengthen our research program.”

“Dr. Pestell and his colleagues bring a wealth of ideas and resources to the Blumberg Institute, and reinforce a faculty that has already proven itself in entrepreneurial science. This is a huge vote of confidence in the biotechnology center model of bringing nonprofit organizations and start-up life science companies together that will help advance our mission, and benefit the entire cancer community,”said Block.

Pestell has published more than 600 works and is the most frequently cited scientist in his fields of cell-cycle and prostate cancer.He has been the reviewer of 18 scientific journals, has served on editorial boards of six journals and has founded several biotechnology companies. He serves as an advisor and reviewer for a number of domestic and international research centers, including NCI cancer centers.

The arrival of Pestell and his research team comes at an opportune time, as the Pennsylvania Biotechnology Center proceeds with plans to break ground for a $10.6 million expansion. The project will add 50,000 square feet of additional space, including at least 40 offices, 18 laboratories, a new auditorium, a new cafeteria, and 100 parking spaces.

About Richard Pestell M.D., Ph.D.: Originally from Perth, Australia, Pestell holds a medical degree from the University of Western Australia, and a Ph.D. from the University of Melbourne, Howard Florey Institute. He conducted clinical training in oncology and endocrinology and was inducted as a Fellow of the Royal Australian College of Physicians. His postdoctoral research at the Harvard School of Medicine and Massachusetts General Hospital with Dr. Larry Jameson focused on endocrine oncology. He completed his executive MBA from New York University Stern School of Business in 2011. He has received many awards for his research discoveries including elected membership to ASCI (American Society of Clinical Investigation), Elected Member, Royal Society of Medicine, the RD Wright Medallion, Elected Fellow, American Association for the Advancement of Science, the Eric Susman Prize in Medicine, Advance Global Australian Award (Biotechnology), a Doctor of Medical Sciences, HonorisCausa, from the University of Melbourne, and awards from Susan G. Komen (Light of Life award, Jamie Brooke Lieberman Award). He has several issued patents in biotechnology, diagnostics and cancer therapeutics.